Is it the first step towards the liberation of Muslim women from inhuman bondage of Islam?

|
Date: 12 Nov 2019
After the bill against "Triple Talaq" was successfully passed in both houses of Parliament, Muslim women have become vocal. Demand has risen among them to make this law more stringent with immediate implementation. On the occasion of Hindu festival Vijayadashami, victims of triple talaq had burned the effigy of ten evils of Islam which brought so much suffering for them (1). Their manifestation is very important as it reflects their confidence; thanks to law against Triple Talaq.
As per media report the ten evil includes triple talaq, husbands who marry the second wife without telling his first wife, End of practice like Halala, victimization of women on the birth of a daughter, harassment of Muslim women who are unable to give birth, Women in Muslim families are not allowed to enter jobs, Restriction on schooling of Muslim daughters, Acid attack on young Muslim girls, Maulana’s variety of fatwas against women by citing sharia and mental harassment of Muslim women in working place.
According to Census 2011, the literacy rate of Muslim females was only 51.9% which is lower than all other religious communities and it is even lower than the national average of females i.e. 65.46% (2). it concludes that the sharia laws on women are strictly implemented in Muslim houses. So the above demands of Muslim women organisation are very much valid. But Muslim clerics (Ulema/Maulavis) express their anger over this event. Maulana Mufti Yade Ilahi Kasmi, head of the Abna-e- Darul Uloom said, “Such anti-Islam work is being done by women to get cheap popularity. Women who are trying to burn effigies of divorce and polygamy by calling them evil because they don’t know Islam correctly.”(3)
The event was organised by the Farhat Naqvi, president of 'Mera Haq Foundation'. 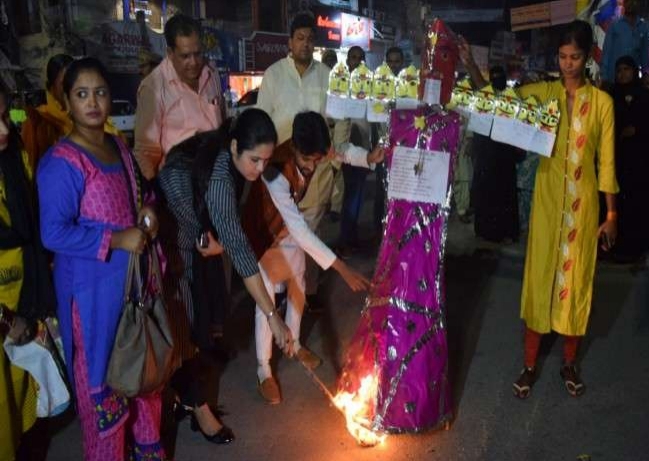 The recent case of TMC Lok Sabha MP and film actress Nusrat Jahan can’t be ignored. After the stinging criticism by Muslim clerics for taking part in Durga puja celebration, she participated in Sindoor Khela ritual at a pandal in the city. She said she respect all religions. Muslim clerics constantly criticising her since her marriage to an entrepreneur Nikhil Jain, a Hindu believer. The Muslim clerics targeting her because of she wear a symbol of Hindu marriage like the ‘Malgalsutra’, use the ‘Sindoor’, worship the Hindu Goddess Durga. According to Muslim clerics, The idol worship and praying multiple God is not permitted in Islam. But still, she continues to behave like her own will(4).
In this 21st century, major social-religious-economic changes are seen in India. At the time of discussion on triple talaq in both houses of Parliament, many Muslim women stood-in support of the bill on triple talaq by the NDA Government which later became one of the major issues of General Election 2019. After this bill was passed with the majority by the NDA Government, many Muslim women started talking about the remaining ridiculous things in Islam relating to Muslim and Non-Muslim women.

India is marching towards Muslim women empowerment. Very basic rights are provided to women at the time of the making of the Constitution. Right to education, driving, freedom of expression etc are very basic rights irrespective of Religion are included in the Indian Constitution. But Islamic countries are still not ready to enhance the women. These countries not only imposing restriction according to their Islamic sharia law on Muslim women but also the same restrictions on Non-Muslim women.
The King of Saudi Arabia Mohammad Bin Salman Al Saud recently gave permission to book a room in hotels to women who are unmarried. The decision has the background of Economy. When he realised that such inhuman laws affecting the tourism industry in Saudi Arabia, he was ready to take such decision having the intention of Economic growth of the country, not women empowerment.
Contradictory to Saudi Arabia, in the last month, Iran lawmakers pass the bill allowing men to marry adopted daughters (5). If the Guardian Council approves the bill, it will be the official permission to the paedophile. In Iran, The girls can marry after the age of 13 with the permission of their father and boys can marry after the age of 15. Shockingly, the underage girls i.e below 13 can also able to marry with the permission of Judge. As many as 42000 children aged between 10 and 14 were married in 2010 and at least 75 children under the age of 10 were wed in Tehran alone according to Iranian news website Tabnak.
The question remains, will Muslim women liberate Islamic countries against such inhuman Islamic laws? In comparison to the life of Muslim women in Islamic countries like Iran, Iraq, Saudi Arabia etc. their life in non-Islamic countries like India, USA etc. is much better.
This is the strength of the Indian constitution. Irrespective of religion, one can express and demand the things under Constitutional ways and Indian Muslim women are now aware of it. With reference to the recent protest of triple talaq victims in India, is it the first step towards the liberation of Muslim women from the bondage of inhuman practices like triple talaq allowed to carry on under the pretext of religious custom in India?