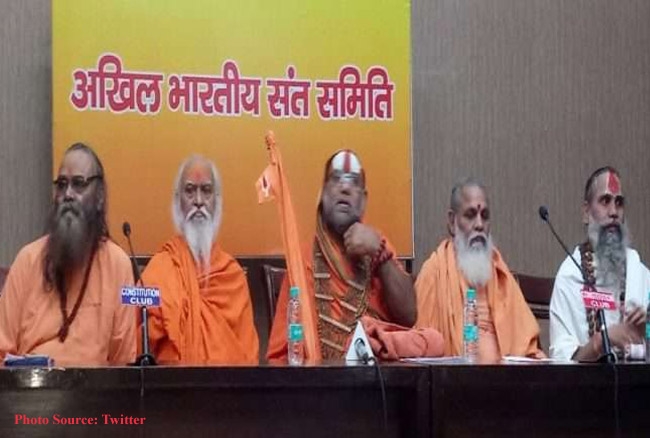 General Secretary of the Samiti Swami Jitendranand Saraswati said Dalits and OBCs were being converted into Christianity and Islam under a conspiracy.

He said a religious conversion amongst Dalits exposes the hypocrisy of Muslims and Christians who claim that they believe in social equality and that there is no casteism in their religions.

Recently in Kerala, two Christian’s faction, Orthodox and Jacobite fight together over the religious property, this creates the Law and Order issue. The district collator deployed the police to sort the issue. This is the same case with the Shia and Sunni Muslims.

“Conversions are being carried out by Christian missionaries who are working in pockets dominated by Dalits and Scheduled Tribes (STs). Missionaries are hatching a conspiracy to damage the social fabric of the country,” he said.

“Petitioning the Supreme Court and seeking reservation for Dalit Muslims and Dalit Christians will deprive actual Dalits of their rights guaranteed to them in the Indian Constitution,” Saraswati said, adding that reservation was provided to lower caste Hindus to end inequality and discrimination.

According to the media report, The letter claimed that states like Andhra Pradesh, Telangana and Jharkhand conducted a census of converted Dalits and ten states curtailed religious conversion and discontinued benefits to Dalits who got converted.

“These steps have helped in preserving the multi-cultural aspects of the country,” Saraswati said.

Recently, on 8th Jan 2020, The Hindu reported that the Supreme Court of India agreed to examine a plea that Dalit Christians or Christians of Scheduled Castes origin should enjoy the same quota benefits reserved for Scheduled Castes. A writ petition filed by the National Council of Dalit Christians (NCDC) that reservation for government jobs and admissions in educational institutions should be made “religion-neutral”.

The petition said, “Allow and extend the Scheduled Caste status to Christians of Scheduled Caste origin for availing special privilege in education, getting scholarships, employment opportunity, welfare measures, affirmative actions, right to contest in the reserved constituencies from panchayat, legislative assemblies up to the Parliament and for availing the legal remedy/ protection under Scheduled Castes and Scheduled Tribes (Prevention) of Atrocities Act, 1989 amended in the year 2018.”