Addressing a press conference, Orthodox Church leaders said the ordinance would create serious repercussions among all Christian denominations in the State. They would file a petition in the Supreme Court of India against the State Government ordinance, The New Indian Express reported. 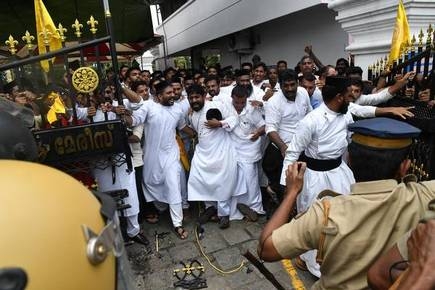 Chief Minister Pinarayi Vijayan was said on a draft of the ordinance that members of both factions could use the graveyard in their parish after conducting the last rites by a priest of their choice outside the Church. The Kerala Government will take action against those who disrupt such functions. The Jacobite faction had welcomed the State Government's decision while the Orthodox one had said it would not allow anyone to dilute the Supreme Court (SC) order. Will study the ordinance in detail and take necessary action.

Today, the Orthodox faction opposes the ordinance and tells Kerala Government to withdraw it, or they would file the petition in SC against the ordinance.

"The ordinance which appears to be vague will definitely have serious implications and would affect all Churches. It is unfortunate that the administrators are trying to sabotage the judicial system through the ordinance for their political gains," said Malankara Orthodox Syrian Church (MOSC) synod secretary Dr Yuhanon Mar Dioscoros Metropolitan.

According to them, the ordinance would not stand legal scrutiny.

"The ordinance is vague, and crystal-clear definitions have not been given to several clauses of the ordinance. The first clause says if a parishioner dies, he is qualified to be buried in the cemetery of the Church belonging to his parish where his ancestors were buried. However, no definition has been given as to who is an ancestor. It has not clearly said up to which generations an ancestor can be counted. It has not been clearly said who is the authority to establish that one belongs to a particular parish and his ancestors were buried in the cemetery of that parish. This ordinance is a secret ploy to circumvent the order of the Supreme Court," Mar Dioscoros said.

"The ordinance stipulates that the Vicar should keep a separate death register, but has not defined who a Vicar is. The word Vicar denotes the one who conducts the funeral rituals but the definition says that whichever person who can be entrusted with conducting funeral rituals. He needs not have a legal status. This will give a scope for a lot of misuse including empowering a person to give any type of certificate regarding the deceased person and then conduct funeral rituals or give a certificate year after a funeral to the effect that he had conducted the funeral rituals at the cemetery," they said.

"The Vicar has the control over the Church, and the Supreme Court has not allowed any parallel rule," the metropolitan said.